The Columbus Pen show in 2000 was attended by Visconti owner Dante Del Vecchio and Visconti created a commemorative fountain pen to honor the show. It was described (by Dante’s friend Len on Pentrace) as a Millenium Arc without the crescent filler, and engraved with the Pen Show name.  It’s also said to be similar to the “You and Me” and Fountain Pen Hospital LE Amigdala.  The pen is the same size as the large Van Gogh.

With only 30 of these made (per color?), this pen is truly a limited edition.  This pen is number 26/30.  Bet you don’t see another one of these too soon!

This pen features the nice big older Visconti 18K gold nib and a cartridge/converter filling system and is brand new in the box including outer box and papers. 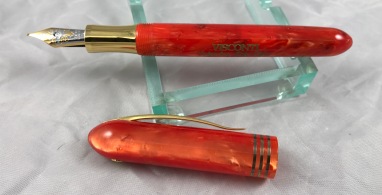 Ask me about this pen: