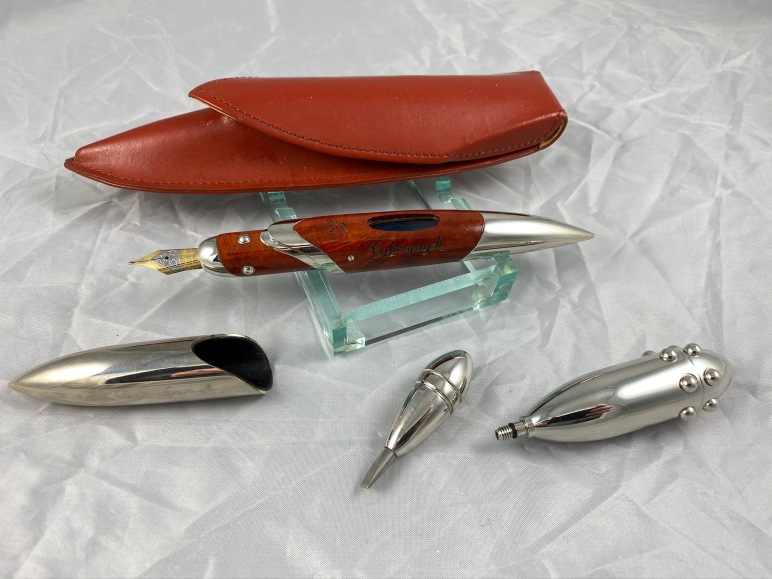 Appears used (as can be seen from the ink window) and shows no wear.

“Let us introduce CYBERGRAPH 2000. The new design to mark the end of the century, and to commemorate the beginning of the new millennium.

The design is asymmetric, the center of gravity has been lowered to give the pen a tumbler effect so that it won’t roll.

Technology has been adapted to the design, and the design has not been compromised in the name of technology. The original idea remains intact. Many months spent in the workshop, researching, testing, and perfecting CYBERGRAPH.

The design of CYBERGRAPH is beyond the understanding of industrial technology, and the most sophisticated of numerical command machines.

Jean Pierre didn’t want to incorporate the ink-holder inside the pen so that the user wouldn’t have to dip the end in ink. The ink-holder is external so that ink can be sucked from an ink-bottle, the holder can then be screwed onto the pen, and ink injected into it.

The cap locks onto the pen section by means of extensible ball-bearings, and fits onto the body by a rounded camber.

The words “the JPL Planet” can be seen inside the sidelight.”

688 pieces briar-wood with brown leather case, ink-pump & screwdriver. Sadly I do not have the panoramic maplewood box.

Ask me about this item: